At Westboro Market this Saturday

Plants coming to Britannia and to Navan

May 8th – Trailer is Full

Look for us at the Pontiac Farmers Markets, Marché Bristol Market on Highway 148 (at Wyman Road) on Friday evenings. Saturday morning: tba

29 Ragged Chute Road
Bristol, Quebec
819 647-2404 (Please leave message.)
Most Saturday and Sunday afternoons until end of September.
Other hours by chance or appointment. Please call ahead to confirm.

Thanksgiving Sunday morning, Jacques Cayouette, a senior botanist for Agriculture Canada – Biodiversity division, and some of his colleagues, came to Beaux Arbres on a quest for rare ferns. They were interested in our farm’s infertile and abandoned pastures as likely sites for Botrychium (now called Sceptridium) ferns.

The pastures on the farm were abandoned more than sixty years ago. Sumacs and raspberries are creeping in, followed by black cherry and white pine, at the edges nearest to remnant woods, but most of the pastures remain open. The sandy soil is so dry and infertile that lichens dominate and the old field plants – common milkweed and goldenrod, black-eyed Susans and tower mustard – struggle.

I had invited a few botanically minded friends from the Pontiac, and we joined Jacques’ group as they spread out over the nearest old pasture. They soon found two species: Grape Fern (Sceptridium dissectum) and Leathery Grape Fern (S. multifidum). They are small ferns, a few inches high, with one green frond and one upright fertile frond each. These are the two commoner species. We were able to find quite a number of each, which allowed us to get a good feel for the considerable variation found within each species.

Feeling chuffed, the professional botanists kept their keen eyes focussed for grape fern. The prize was St. Lawrence Grape Fern (S. rugulosum), a genuine rarity that only grows in open sites on fine sands in the Great Lakes/St. Lawrence area. Eureka! The botanists found some specimens they were quite sure were the rare St. Lawrence Grape Fern. Jacques bagged a specimen to take back to the lab for confirmation.

Given the variation within the species, especially within S. dissectum, and the rather subtle differences between the species, I am not at all sure I have a good feel for what marks a plant as St. Lawrence Grape Fern. It is more rugulose than the other two. Okay. I think I have it.  I will have opportunities to revisit our fern site – hey, its just beyond our farm pond – this fall. The grape ferns have an unusual growth cycle. The fronds emerge in late summer – St. Lawrence Grape Fern emerges later than the other two – and last into the winter.

I am very grateful to Jacques for showing me the ferns I would otherwise have overlooked. I used to think the old pastures were not that botanically interesting as they seemed highly disturbed and dominated by common early succession species. I thought the lovely lichens in the lichen crusts were the most interesting thing about them. Now I know that what might well be the rarest species we have on the farm is there in the old sandy pastures. 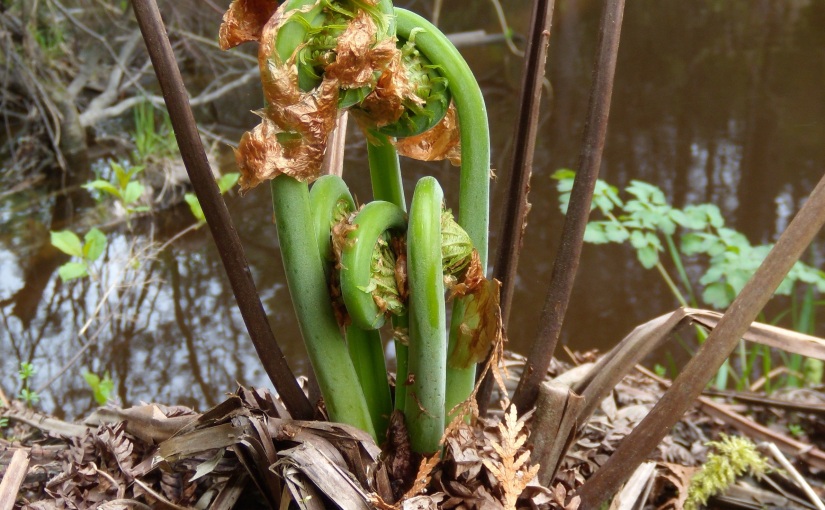 Still two months away. Winter is long in Quebec. 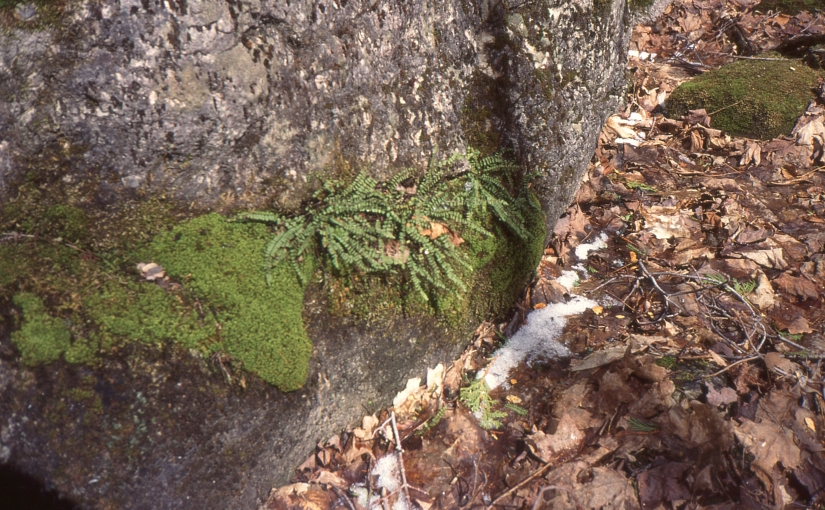 Last week I posted on ground cedar, a fern ally. This led me to think about true ferns which stay green in winter. At our farm we have two:  common polypody (Polypodium virginianum) and evergreen wood fern (Dryopteris intermedia). Snow now covers all the interesting native evergreen ground covers and that is a good thing. We had one night in the first week in January when it got down to less than – 30° C with only a few centimetres of snow, a potentially plant-killing combination. I love the idea of winter gardens and enjoy looking at the pictures of fine winter garden designs from Maryland or Oregon or even Niagara-on-the-Lake but almost none of it makes sense for the Ottawa valley. Even the majestic white pines are darkened to near-black ink drawings by -30°.

Still, the relatively open December meant we were out in the woods enjoying the muted colours and textures of the season and ground-hugging greenery, partially covered by fallen leaves, is part of the beauty of the early winter.

We do not have any Christmas fern (Polystichum acrostichoides) on the farm. I don’t know why; I must introduce some to a shady garden. The picture was taken at Shining Tree Woods, a nature reserve belonging to the North American Native Plant Society.

Because our rocks are granitic, for the most part, we do not have any of the lovely little evergreen ferns which grow on mossy limestone: walking fern and maidenhair spleenwort, among others. A quick trip to Asplenium in Wikepedia revealed a couple of surprises: there is a subspecies of maidenhair spleenwort which grows on acidic rocks, Asplenium trichomanes subsp. trichomanes, and ebony spleenwort (A. platyneuron) hybridizes with walking fern (A. rhizophyllum) – two very cool things to look out for on nature hikes.

On the south edge of the farm we have a ridge of the Quyon marble, a very, very old calcareous rock. At the base of the marble seam we have interesting shallow caves where porcupines overwinter. This is also the site of the greatest concentration of plants such as blue cohosh, bellwort and maidenhair fern, which like the relative richness of the soil. So far I haven’t found any calciphile ferns clinging to the marble cliff face. The little cliff-face ferns should be enjoyed when and where you find them; they are exceedingly difficult to propagate and cultivate.

The evergreen ferns of the forest floor are relatively easy to grow from spores. In years gone by, I have successfully raised little sporelings of wood fern and Christmas fern. Northern maidenhair is also easy to grow from spores. (The difficulty with maidenhair in city gardens comes when you set them out in the garden – they are devoured  by slugs.) I haven’t got any terrariums filled with fern sporelings on window ledges this winter, but it is something well worth doing. Perhaps I will try Christmas fern spores next winter – it would be the easiest way to get a lot of little Christmas ferns.

Our most robustly evergreen fern, Christmas fern, associates well with evergreen sedges in shady gardens. Christmas fern (Polystichum acrostichoides) is a mid-sized fern with leathery foliage. If you can get it to grow in a dense mass it can be quite weed-suppressing (see photograph below). It is far more likely to reward you if it is grown in a rich, loose soil full of organic matter. Loose organic soil requires some work to establish and maintain in urban gardens, where heat and non-native earthworms breakdown organic matter with unnatural rapidity. Christmas fern will grow, and even thrive, in less accommodating soils but it will be slow to knit itself into a ground-covering mass. Look at the photo of wild Christmas fern growing in a woodlot – it has colonized an old, decaying log, thriving on the moisture and organic matter in the decaying wood, but it hasn’t moved into the surrounding soil. This picture was taken in mid-December. Christmas fern fronds used to be gathered for Christmas flower arrangements.