New Seeds in time for Christmas

Some Wildflowers of Late Summer

Look for us at the Pontiac Farmers Markets, Marché Bristol Market on Highway 148 (at Wyman Road) on Friday evenings. Saturday morning: tba

29 Ragged Chute Road
Bristol, Quebec
819 647-2404 (Please leave message.)
Most Saturday and Sunday afternoons until end of September.
Other hours by chance or appointment. Please call ahead to confirm. 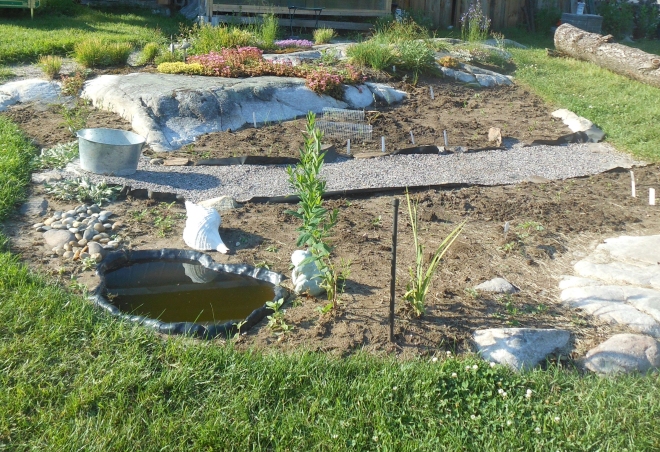 The original rock garden was a granite outcrop in front of the barn, around which lots of chives had seeded themselves. On the rock itself, two varieties of sedum dragon’s blood and gold acre, persisted from some long forgotten gardening foray.

Last spring, I pulled out chives and encroaching lawn grass and added creeping phlox, creeping thyme and a clump of the fine autumn-blooming Sedum sieboldii. These were purchased at a nursery. More importantly, I added a great many native species. (I suppose creeping phlox is native in some sense.) From the ditch along the farm road, where the local blue-eyed grass (Sisyrinchium montanum) was abundant, I dug up a few clumps of this little iris relative and planted them in a deep crack in the rock. From the dry hill behind the barn, I collected some offsets of field pussytoes (Antennaria neglecta) and added them to an area of shallow soil where they immediately began to spread vigourously.

From seed I had collected in the wild the previous summer, I had quite a few tiny plants of early saxifrage and pale corydalis. They were hardly bigger than dimes and yet they grew strongly when planted in tiny pockets of soil on the rock outcrop. The exceptionally wet summer we had in 2013 certainly helped them get established. I also planted seedlings of hairy beardtongue (Penstemon hirsutus) and harebell (Campanula rotundifolia), which I had grown from wild-collected seeds.

END_OF_DOCUMENT_TOKEN_TO_BE_REPLACED

This natural rock outcrop in front of the barn had long been planted with chives (many, many self-seeded chives), dragon’s blood sedum and a small patch of gold acre sedum. Last year I started its transformation into a native plant garden by taking out some of the chives and adding field pussytoes, early saxifrage, hairy penstemon, harebells, blue-eyed grass and pale corydalis. I also added a clump of the non-native Sedum sieboldiana for some autumn bloom.

I know gold acre sedum is an invasive but it seems to be a problem on limey soils. I have never seen it move onto granite outcrops. It is not something I would choose to plant but it doesn’t seem necessary to remove the patch we have.

The new plantings grew so well, and the pussytoes and early saxifrge looked so great this spring. that I was inspired to extend the garden so that I could add more native species. Removing the sod between the two outcrops was heavy work. Planting the little wild flowers was the fun part. I have not yet filled up all the space, which is exciting. Room for some new things as I find sources for them!

The baby plants in the picture include wild lupines, nodding prairie onion, pale penstemon, goat’s rue and the lovely non-native flower called gas plant, Dictamnus. I have some bluets, some bird’s foot violets, and some cardinal flower to add as soon as they get large enough to plant out. I was hoping to have some ziggy, or white camas, but my attempt to grow it from seed went askew. It seems when ziggy seedlings go wrong they turn into timothy grass. Who knew?